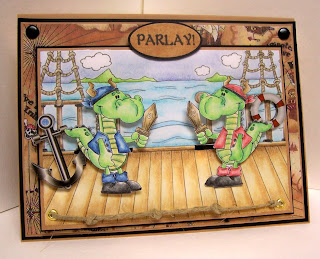 Our SCRAPPY FROGS CHALLENGE this time was to use the ship background freebie from DUSTIN PIKE. We could use it any way we chose so I used DP's pirate dragon which was also a freebie. His images are the cutest and they are all digital so they can be sized any way you like. And in this case I printed the dragon's mirror image so that I could have dueling dragons. 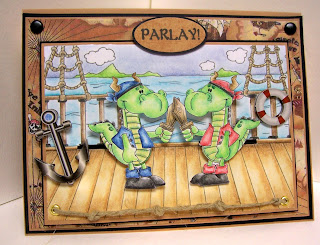 I also put them on a rolling mechanism (tutorial here)so that they could move back and forth while they were dueling. I had a hard time taking a picture of this one because I couldn't stop playing with it.

Hop on over to the SCRAPPY FROGS CHALLENGE BLOG and join in on the fun. The prize last week was a Basic Grey Collection Pack 12"X12" LIME RICKEY! They always have super prizes and it is random draw so everyone has a chance to win. Good luck!

Oh yeah, and if you haven't seen Pirates of the Caribbean, parlay is part of the pirate code that says a person has to be taken to see the captain without being harmed or something like that. It just popped into my head as I was making the card and it fit at the top so I used it, probably should have used en garde though.

This is so fun, Kim! I wish it was at my house so I could play with it too!!!

Girl, my jaw just met the floor. Ok, so did you DRAW that entire background? You must know by now that my boy LOOOOOVES Pirates and I can totally see a Matey card here but OMG I can't draw?!?! You are AMAZING, Kim! I have to know how you did this! LOL!!!!

What a fabulous card! Oh my goodness, I love that Pirate Ship Background. I will have to go and check that out! And you did such a good job using it! Love those dueling dinos and the great coloring. Such a cute card!

Wow, this is so amazing! So creative and cute!

Are you kidding me?! This card is AMAZING! I have never heard of Dustin Pike...but I think I'm in love with his images thanks to you! Your card is gorgeous on so many levels! I really can't believe my eyes. I only wish I was half as creative as you! Thanks for sharing. I can't wait to start coloring! =)