Hope you all had a wonderful holiday!

My daughter and I were in Joann's (a minor miracle for her) a while ago.  She couldn't find a homecoming dress she liked and we were looking for a pattern.  We didn't find what she wanted but she did find a pattern for pillow letters and asked me to make her some for her dorm room for next year.  I loved how they turned out and how easy they were to make so I made my neice a set for Christmas.

I used light pink fleece and made some felt flowers to decorate some of the letters. 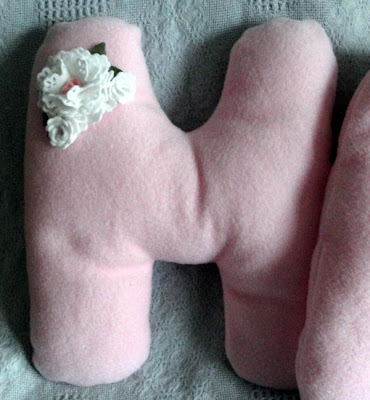 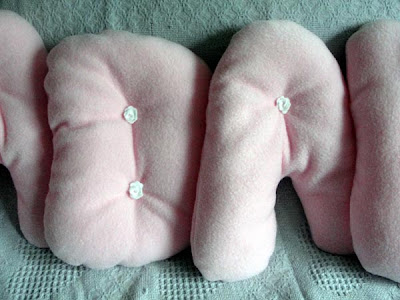 I haven't spoken to my sister yet but I hope she liked them. My daughter loved hers too. The pattern is McCalls 3274 and the flowers were made using Spellbinders dies which I described HERE.

Have a great day! LINKY PARTIES

SHE'S GOT IT TOO!

I had pretty much given up on thinking that the crafting gene which was passed on from my talented mom and dad to me, had made it through to my daughter. She has never really shown any interest in any of it. I bought her a sewing machine when she was about 12 and she has never even tried using it. How surprised was I last night when I got a text saying she needed to buy craft supplies (can I get a fist pump and a yesssss) to make some gifts for her friends. THUD... not only because she wanted to make them but because she asked to buy stuff. I have a whole warehouse full of craft stuff that I never use including most of what she needed. 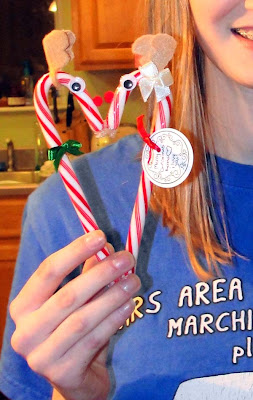 She wanted to personalize candy canes  to give to her friends and did it all without my help or suggestions. How cute is that? Sniff, sniff, I am so proud. 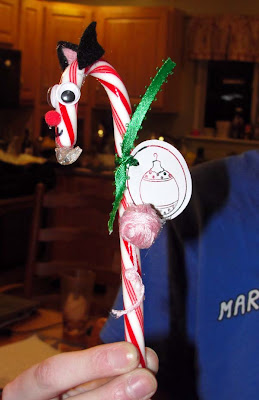 This one is a kitty with a ball of yarn, sigh.... I think it hasn't skipped a generation as I had feared.

Changing gears here, I have a little something I made my boss. It is a paper pieced mug rug with, of course(if you didn't know we study frog development), a frog on it. I found the pattern HERE ON ETSY and thought it was really cute. Now, this man has tons of frog stuff all over his office and I usually don't get him more but this was functional and something he hadn't gotten before. 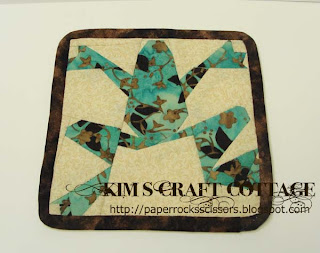 Before you think bad thoughts, I know my quilting skills are lacking (just take a look at the skrewed up left leg) but I just figured I could say he was a mutant frog affected by toxins in his environment.

Hope you have a great day! LINKY PARTIES

Ok I know I have gone crazy with the felt projects but it is so much fun creating them. I have two more today and then one more thing tomorrow and I swear I am done for this holiday season. 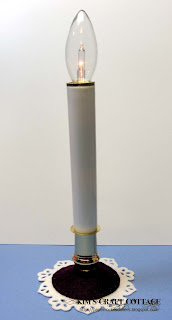 The only household decorations I got up this season were candles in our windows (and a tree of course) and I thought they needed a little someting extra. Soooo I made them their own little tree skirts out of felt. 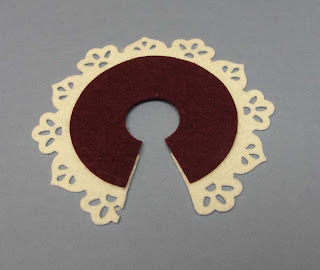 I used Spellbinders dies Floral Doily Motif and circles to layer on top of each other then cut a v shaped section out as shown. 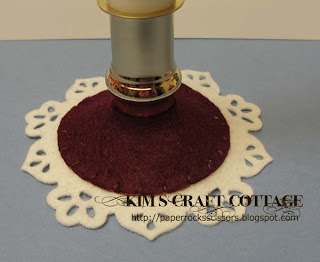 I next stitched them together with the blanket stitch (as always you can glue instead) and wrapped it around the base. Then stitched up the back. I love these they make the candles look so much more festive. Next up is a pretty little snow lady. 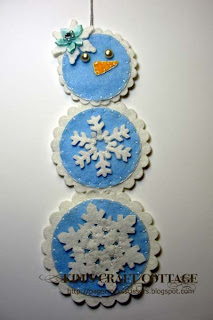 She consists of Spellbinder dies scallop circles, reg Circles and one of the Snowflakes (can't remember which one) all layered together and stitched up. Are ya sick of felt yet? Not me, have a crafty day! 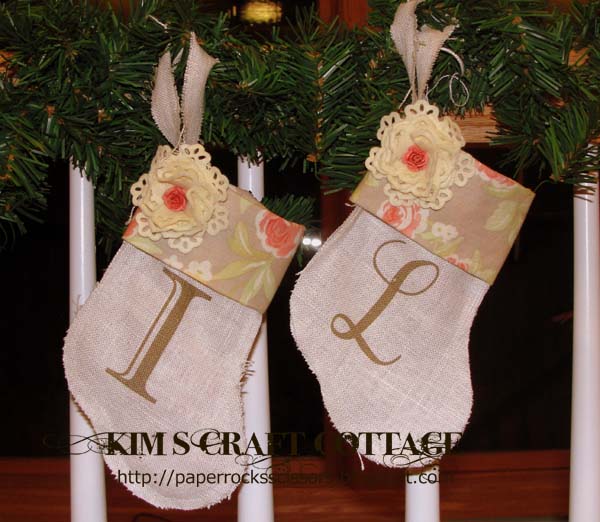 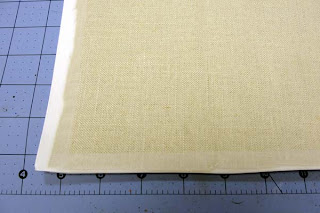 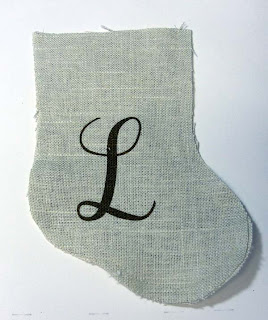 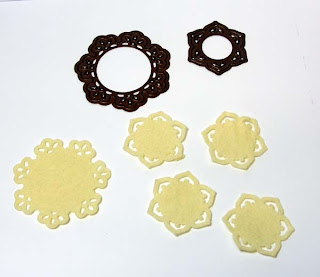 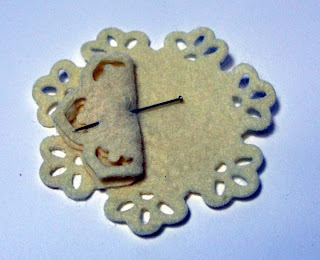 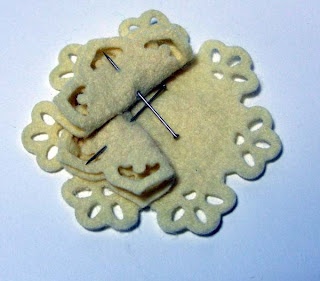 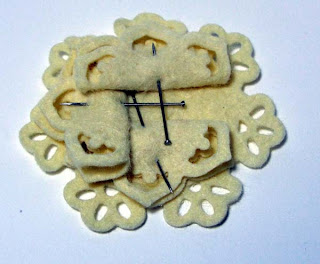 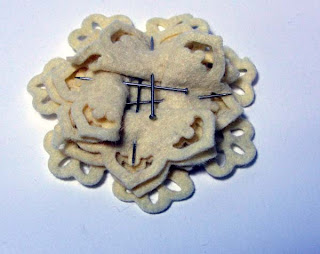 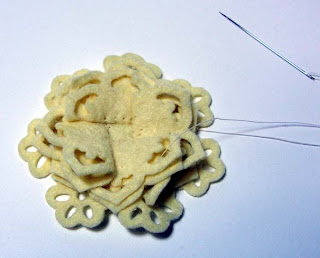 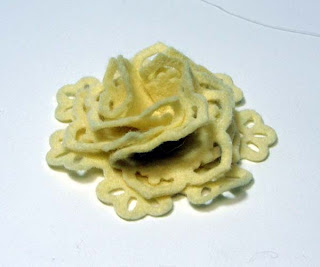 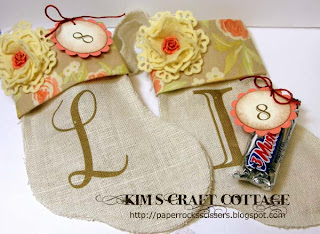 This is one of the Christmas cards I will be sending this year. I was determined to use the stocking punch I got from Stampin Up and the snowy Bo Bunny paper and this is the result. I needed to keep it simple so that I could make a bunch. The sentiment is Christmas Sentiments Digital Stamps from The Digi Chick. 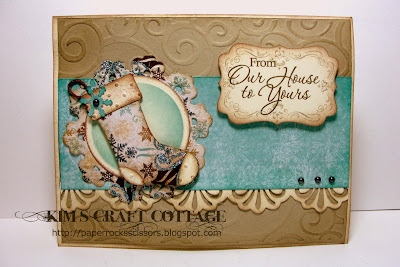 Once I finished the ornaments from THIS post, I realized they might make a cool letter block.  Merry Christmas would have taken me till next year to finish so I settled for NOEL.

The letters were made by increasing a font to about 2.5 inches high, cut out of paper and used as a template to cut the felt.

FELT
I finally got around to trying my Spellbinder dies with felt and am so sorry I waited so long. I made some ornamants that double as money/gift card holders for this Christmas. 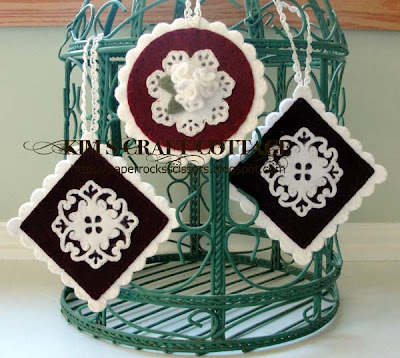 I first tried some recycled, synthetic, felt that I purchased at Joanns or Mikes and it didn't work at all. I went searching on the web for what I was doing wrong and found a brilliant blogger (sorry, can't remember who) that said wool felt cut like buttah. Off I went in search of wool felt. The 100% wool felt looked too thick so I chose the 35% (the 20% ended up working ok too) wool/65% rayon and ran home to try it out. 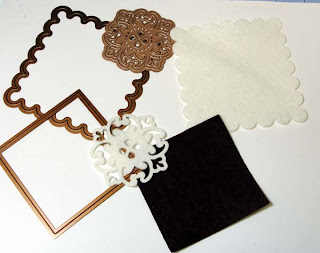 I used a square, a scalloped square and a Parisian accent thingy. The basics shapes cut pretty well with only one roll through my machine which is a Wizard die cutter. The more intricate parisian accent die took a little more work. I had to add a shim of a doubled piece of cardstock and run it back and forth a couple times. It still wasn't completely cut but I did a little trimming with my trusty tiny Ginghers. 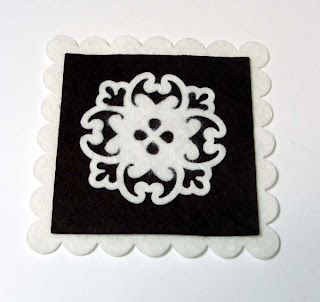 I layered the Parisian accent piece onto the maroon square and did a small blanket stitch around the edge and a bit on the inside with embroidery floss. 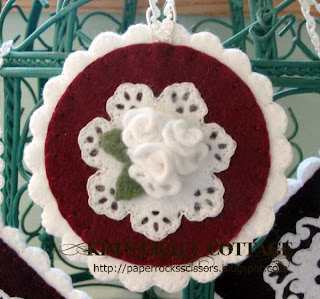 The circle is just an ornament. The flowers are from the Floral Doily Motif die set. I did some other felt flowers which I will have a tutorial on how they were made in a future post. 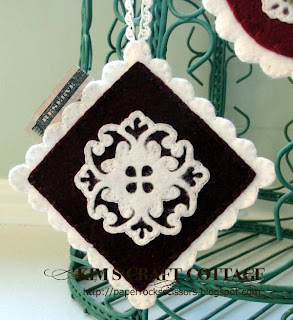 But the square is a gift card/money holder. I doubled the white scalloped square layer and stitched around three sides to make a pocket. See the money peeking out on the left side?
I loved how these turned out so I made another project that I will post tomorrow.
Now for being grateful.

GRATITUDE
I found out yesterday that I made the first cut of the Spellbinders Design Team (holy cow are you flippin kidding me???) search. In addition to being unbelievably excited, not to mention terrified of the competition for the next round, I am first and foremost grateful to Spellbinders for giving me such an amazing opportunity.  I feel like a goofy actor who says they are just happy to be nominated for an award regardless of whether or not they win but I really do feel that way.  So wish me luck and either way I will be happy to have made it this far. 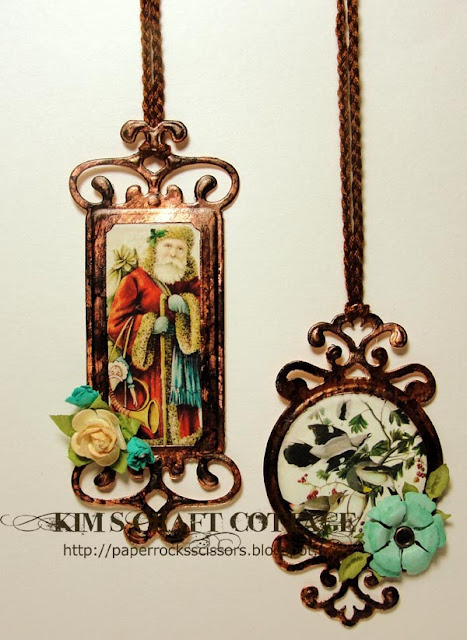 I have a couple more vintage type ornaments for you today. I am keeping these though because I really like how they turned out. I hadn't intended to make them but Kellie Mize from THE DIGI CHICK had some new Vintage Winter Charms digis and I thought they would be perfect paired up with some Spellbinder dies I have. I cut the dies from some bronze colored craft metal. I thought it was a little too shiny so I added some bronze flake paint and dabbed a bit of pitch black alcohol ink on top to make the frames. The images were printed on semi-gloss photo paper and glued to the back of the frame with E-6000 glue. I was in a hurry to get them done so I didn't take pics of the process. Let me know if you want to see how I did it and I will post later. These are the dies I used; Spellbinders Shapeabilities Dies-Fancy Tags Nestabilities -Rectangles and circles (to cut out the inside of the tags)