Unfortunately (for me not him), my boss is retiring and my job retires with him.  If you gave me a magic wand and said create the perfect job this would have been it.  I won't go into all the reasons but I can honestly say that I didn't have one single day in nearly 13 years that I dreaded going to work.  So, I thought I would post some pics of where I work and some of my amphibian friends. This post is mostly for my mom who has never been to see where I work. You all are welcome to join in for the 5 cent tour and a little amphibian education. 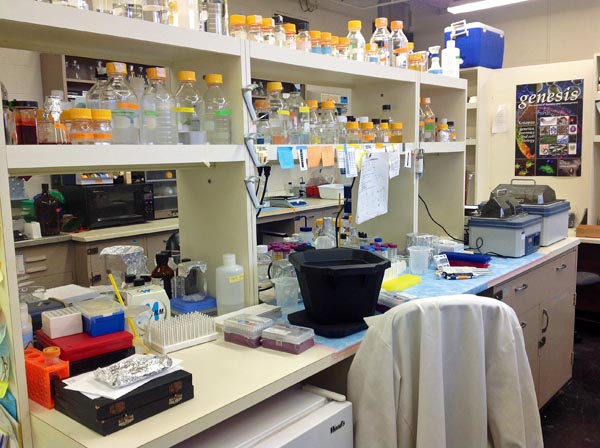 This is my lab bench where I spend most of my time conducting mad scientist experiments and where, every once in a while, I yell eureka just for fun.  Not really.  I do conduct experiments but don't yell eureka.  The following are pictures of some current residents with which I share the lab. 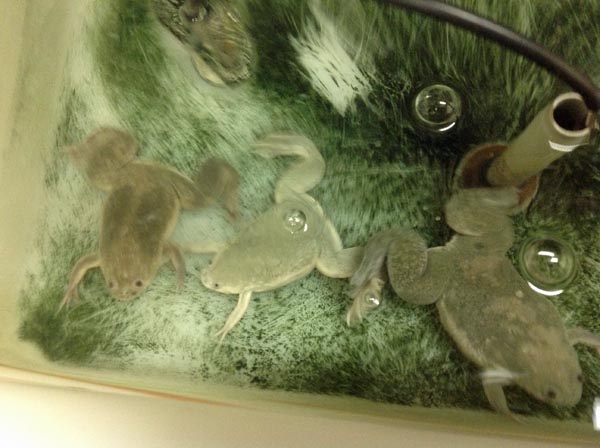 These are some Xenopus laevis  AKA african clawed frogs. They spend their entire existence under water. Pretty much a standard species in research and in my opinion, butt ugly. 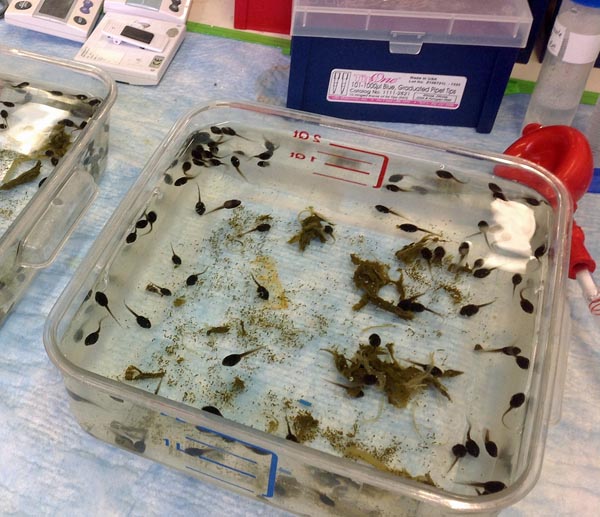 Next up we have some Rana pipiens tadpoles, AKA Northern leopard frogs. If you live in the US or Canada and you have a pond around you may see these guys hopping around in your back yard. 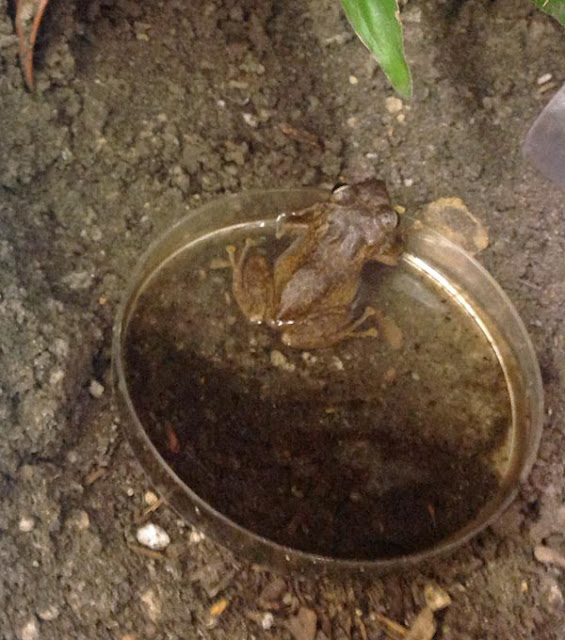 This little guy is Eleutherodactylus coqui commonly referred to as coqui.  So named because they make a vocalization that sounds very much like the word coqui.  They are indigenous to Puerto Rico but are considered an invasive species in Hawaii.  This is the species that we study.  Why you ask?  (at least pretend you're interested) Well, let me ask you this.  Did you know that not all frogs start out their life as a tadpole? If you answered yes, you either spend far too much time watching animal planet or are a biologist too. 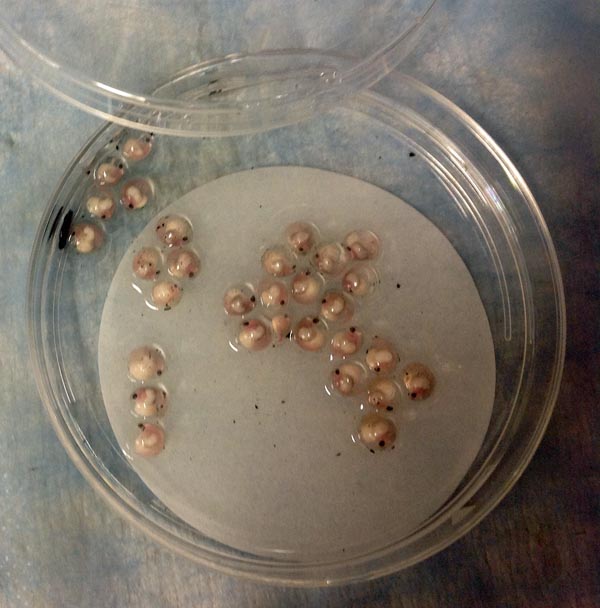 This is a picture of the coqui embryo.  They in fact do not have a tadpole stage but develop in an egg and hatch out as little froglets. The little black spots are their eyes and the big white blob is a yolk sac.  The yolk sac feeds the embryo as it develops. Frogs who have a tadpole stage don't have big yolk sacs, they swim around eating plants for nutrition as they develop into frogs. 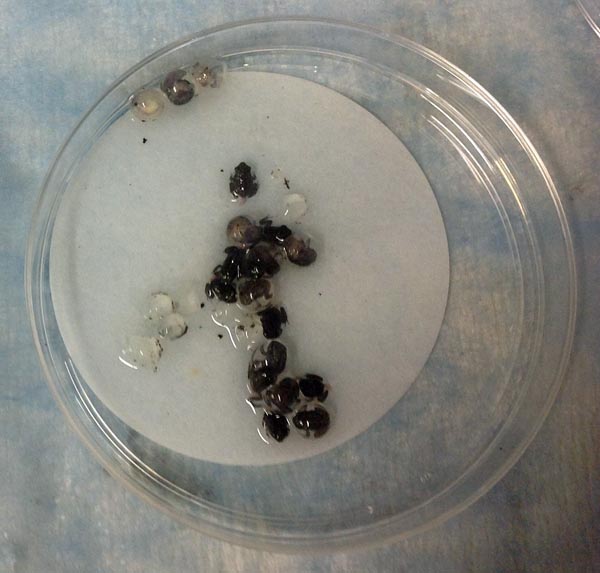 They then hatch out of the eggs as itsy bitsy,  teeny tiny, adorable little froglets.  Yes, I have a bias towards cute things.  My son is fortunate to have benefited from this bias. One of the many cool things about this frog is that the female lays the eggs but it is the male that stays with and protects them through their development and hatching process.  After that though,  it is a heave ho and you better run quick because you might turn into his midnight snack.

Unfortunately I couldn't find my own pictures of this creature, but we also had  Pipa pipa which are really, super duper, way cool frogs whose eggs are embedded into the female's back while they develop.  Ladies, if you think carrying a child in your womb was tough try carrying about 60 kids embedded in your back for a couple months! I can only guess but it doesn't seem very enjoyable. Here is a Wiki pic of some of the froglets hatching out of the female's back. Makes you wanna squirm doesn't it? 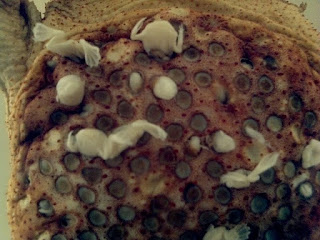 
So, I am out looking for a job as wonderful as this one and can't imagine that I will ever again be as fortunate.  I am however extremely grateful that I have had the last 13 years doing something so incredibly interesting and fun.

Back to crafting with my next post with an update on a couple different things I have been working on.

Just a quick post to show I haven't fallen off the earth.  I made this calendar using some gorgeous vintage digital supplies from OPTIC ILLUSIONS at THE DIGI CHICK.  I found the wooden base at a thrift store for all of 2$ and I was going to use it for a recipe holder which is what it was intended for but I thought it would make a pretty calendar instead. 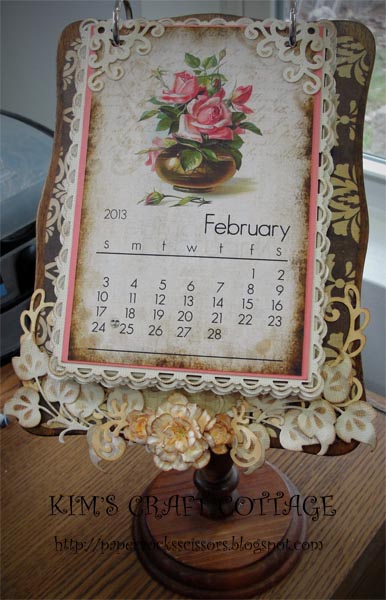 I made the flowers myself using some new paper from spellbinders that I grabbed at JoAnns.  I really liked how they turned out and were pretty easy to make.  I did take some pics while I was making it but it is pretty straight forward and I don't have time to post right now.
Hope your weekend is going well!
Posted by Kim at 3:52 PM 2 comments

LUV U TO THE MOON

Isn't it funny how texting words have completely permeated our language in other areas of our life?  I find myself wanting to spell that way in almost everything I do because it so quick and efficient.  Anyway....  It is getting increasingly difficult to make Valentine's for my son that he doesn't think are sweet and sappy.  He of course loves getting the sweets associated with the holiday but the pink cards? Not so much.  This year I came up with a more masculine themed treat container that I think he will like. 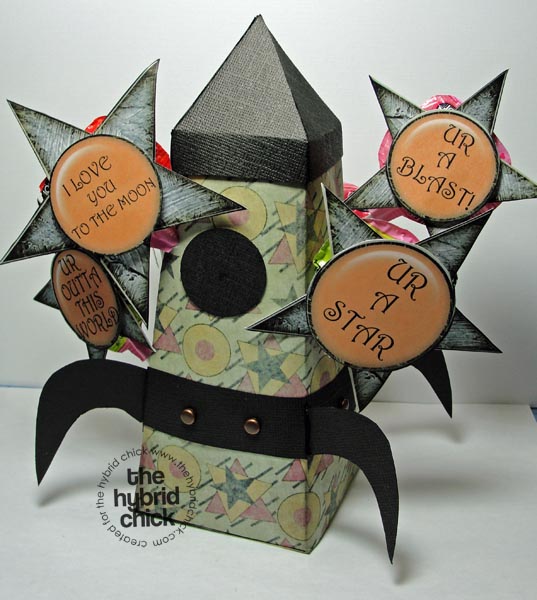 It is a rocket ship filled with Hershey Kisses and covered in lollipop stars.  I have a tutorial on how it was made over at THE HYBRID CHICK if you are interested.