I have updated my ALL SEASON WREATH for Easter. I have such a busy life that I have many (about a trillion) more projects than I have time for. I discovered with this wreath that making a base project and periodically updating it is a great way to make my house pretty with very little time or effort. 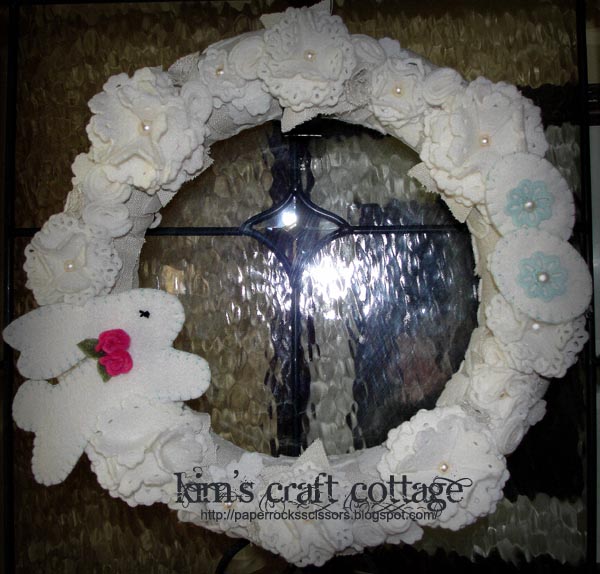 I adapted a couple of leaping bunny pictures from the internet and made one I liked. You can download the BUNNY PATTERN HERE. 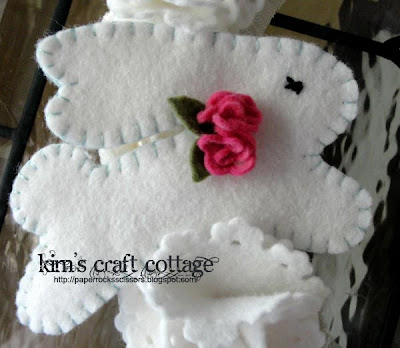 The blanket embroidery stitch was used to go around the edges of the bunny in a light aqua color and the flower and leaves were made with Spellbinders dies. 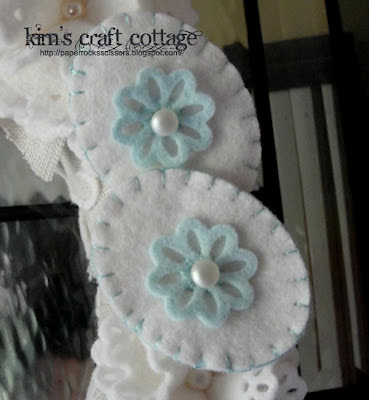 The eggs were made with Spellbinders Oval and flower dies. Let me know if you have any problems downloading the pattern. I haven't done this in a while but it should be ok. Have a great weekend! Linky parties

Ok, so I swore (to myself) that I wasn't going to apply for another design team but at the very last minute (on the very last day of the call no less) I saw that HEARTFELT CREATIONS was looking for a new design team. I love their products so I hurriedly sent a few samples of my work and I made it through the first round! HC would like customers to be part of the selection process so they asked us to post our entry projects.  Since it was last minute entry, I sent samples I have already posted here so they may look familiar. 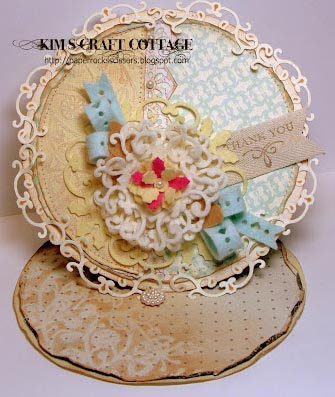 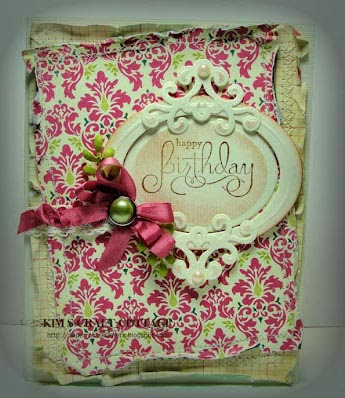 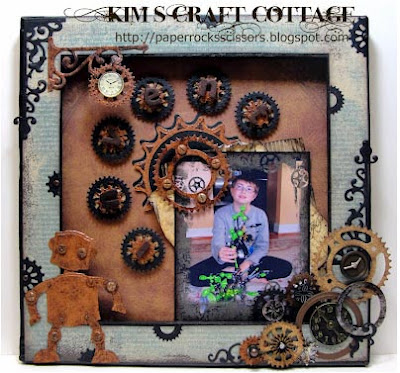 Thanks so much for stopping by and go let Hearfelt Creations know if you think I should make the team!
Posted by Kim at 8:03 AM 4 comments

I only spent about three hours sewing, I get up at 5AM so I don't last very long in the evening. I think I did pretty well though. I got it about 3/4 of the way finished so I am happy. 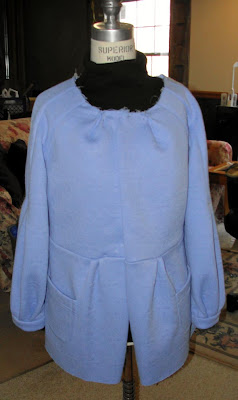 I don't like how the cuffs look so I am going to redo them and I need to find some really great buttons. Participating was a great way to finally schedule some me time and get something done for myself. Thanks for hosting Heidi, this is such a great idea!
Posted by Kim at 10:37 AM 0 comments

My sewing machine is in warm up mode and I have plenty of caffeine! For me, the Friday Night Sew In has begun. This is what I am working on. 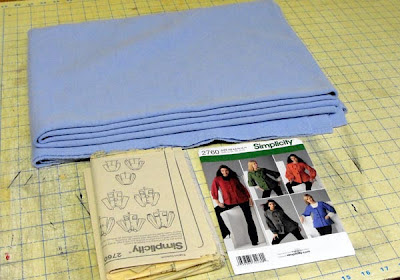 I have had this fabric for forevah and I still love it. It is a double knit with a pattern quilted into it. The pattern I have had for maybe a year or so. I am doing this view but without the collar cause I didn't have enough fabric. 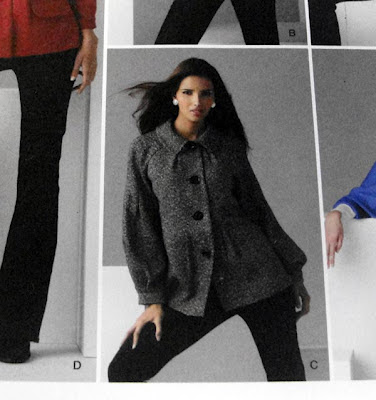 That is the problem with buying fabric when you don't have a specific plan for it. I cut it out and started on the pockets last week for a little head start. I will post pics tomorrow to show how far I got.
Posted by Kim at 5:48 PM 0 comments

I have had a jacket cut out for about a year and I haven't had time (well I have been lazy too) to finish it. So, I am going to participate in a FRIDAY NIGHT SEW IN this Friday. Hopefully it will help give me some motivation to finish the jacket up before it goes out of style! If you like to sew and have some UFO's join in the fun.

I am still finding ways to use felt flowers. I made a wreath for my front door that I can change out the decorations according to the season/holiday. This month it is St. Patty's Day and next up will be some bunnys for Easter. Scroll down if you would like to see how it was made. 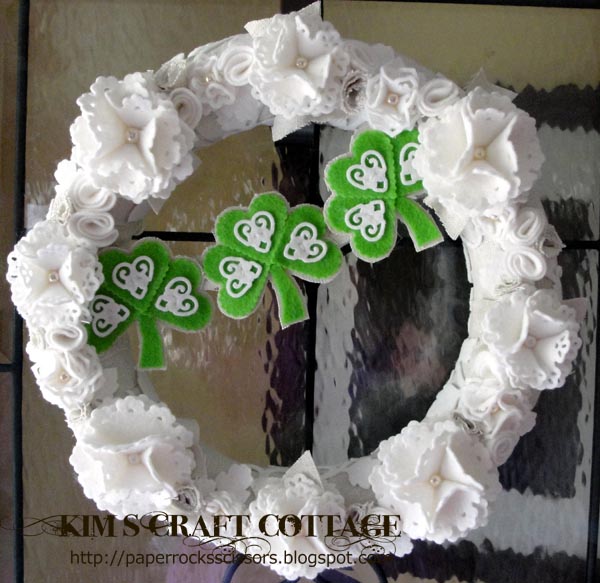 I made all the large flowers as shown in THIS tutorial. 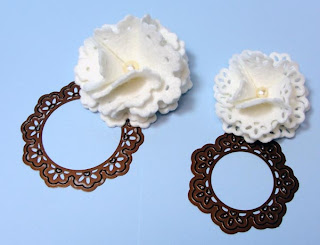 I started with a styrofoam wreath found at Michaels and wrapped (and glued as I went)  strips of beige linen around the entire circle. I used regular elmers white glue for this part as I didn't want the bumps I sometimes get with a hot glue gun. 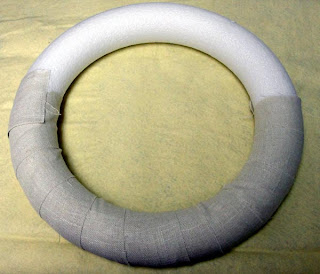 I next used wool/rayon felt with a Spellbinders die to cut a leaf pattern. 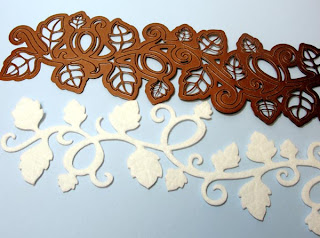 This was wrapped and glued on top of the linen. I think it is kinda pretty as is but you know I couldn't stop there. 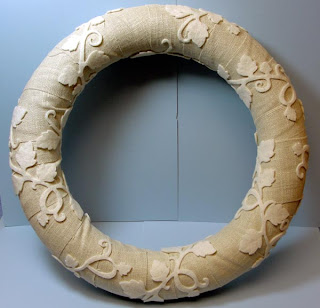 I cut small rectangular pieces of the linen and gathered the center to make small bow-like shapes and attached them (with a hot glue gun) to the wreath. 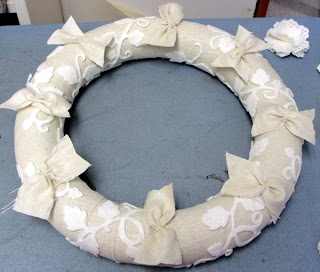 The flowers were glued onto the linen strips. 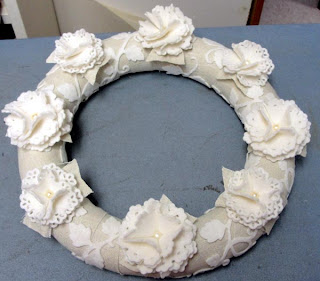 I then made small rolled flowers in both linen and felt to fill in the open areas. A circle was cut using a Spellbinder's die and assembled as shown.  I hand stitched the flower to keep it together but it could be glued as well. 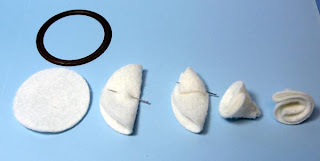 This is the finished wreath. 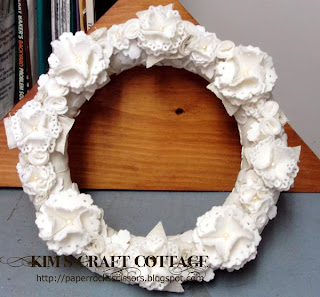 For my seasonal decoration, I cut some heart shapes out of another Spellbinder's die and formed a shamrock petals. The stem was cut freehand. 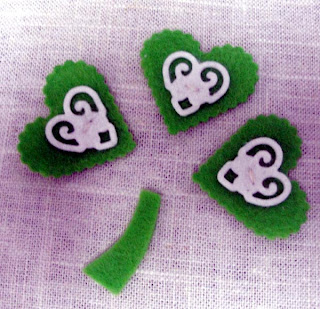 The pieces were hot glued onto linen and I cut around the edge. 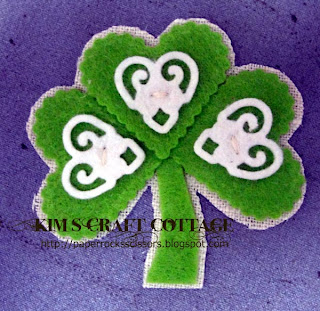 Three of the shamrocks were glued onto a strip of linen.

Small slits were cut on the end of each side of the linen. 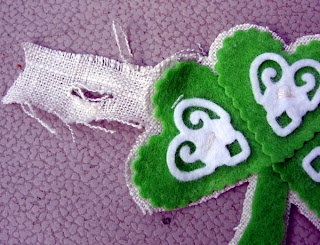 I added a thick dot of hot glue to the back of a button and let it dry. This made a small shank that lifted the button up from the wreath when it was attached.  This allowed the linen to slide over the button and hold it in place. The buttons were hidden under the petals of the flowers. 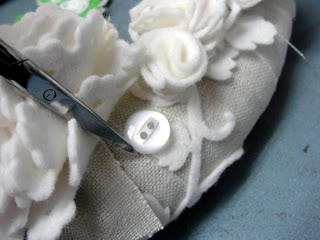 All set for St. Patty's Day.  I sorta wish I hadn't made the biggest flowers as big as I did but I do like how it turned out and I am anxious to get started on some bunnys. 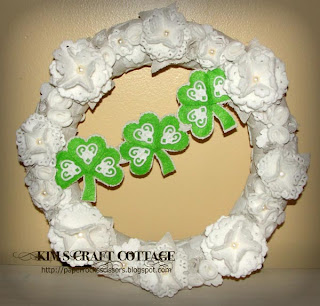 Thanks so much for stopping by!

I have two sisters with Birthdays this month so I spent a little time in the craft room this weekend making cards.  They are both getting the same card (shhh, neither of them read my blog so don't tell them) because I spent most of the weekend cleaning. I finally had two whole days with no scheduled events (except for my son's piano lesson but my husband took him) so I got caught up with laundry and other crappy, long overdue chores. 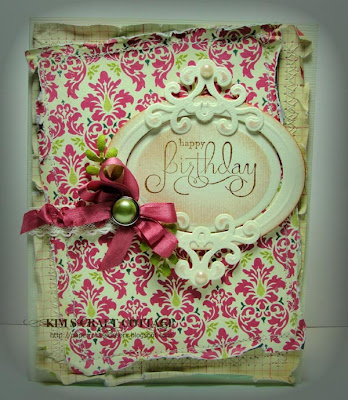 I also finished a year-round wreath for our door which I will be posting as soon as I get the tutorial  put together.   What do you think of the background of the picture.  I found a new photo editing program called ipiccy through one of the blogs I follow.  It is free and it does some fun stuff for pictures.  I am a bumble when it comes to photoshop so I really like how easy it was to purty up my picture.  I like the darker background, I think it makes the focal point stand out more.

Have an awesome week!
Posted by Kim at 5:57 PM 1 comments

I have a tutorial on how this Hexagon shaped box was made over at THE HYBRID CHICK. 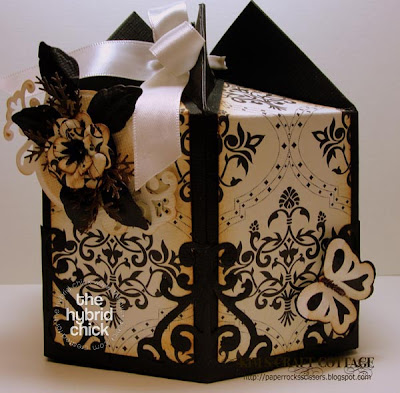