I used a compass to make a basic circle about 3.5 inches in diameter. 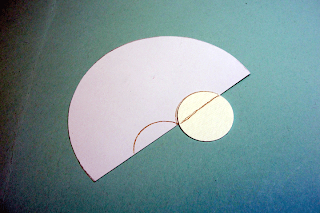 A one inch circle punch was used to make a template for the indented parts of the parachute. 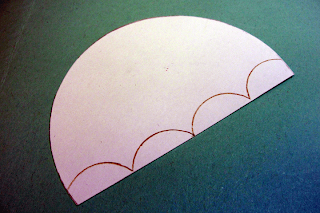 I wanted a little dimension on the front of the chute so I used another circle and some dark brown ink and sponged some shading where one would see the seems.

I added a layer of dark brown CS to the back and taped on some embroidery floss "straps".

A flat brad was attached to the back of the parachute using E6000 glue. I like this type when I want a strong bond.

A whole was punched in the top left corner of my card base and an eyelet was inserted from the back and attached with a little glue. Ignore the second hole, it was a boo boo.

I placed a layer of patterned paper over the back of the parachute to cover all the tape. I punch a whole in this layer so that the brad would fit through. Th brad was then threaded through the eyelet located on the front of the card base. The legs of the brad were then bent around the back of the eyelet to secure it.

I Stamped Easter Anya and cut off her pony tails which were then glued to Soldier Ian's head.

I taped the floss to Soldier Anya and glued a brad to her back. I placed a layer over that to cover the tape. 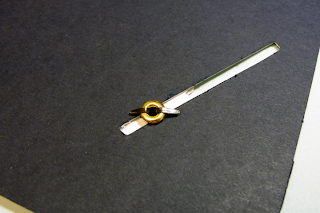 I used the brad as a guide to form the slider opening. I just followed along the brad with a soft pencil line and then cut the opening with my craft knife.


An eyelet was place through the back of the card base but was NOT glued so that it would slide along the opening. The brad located on the soldiers back was threaded through the eyelet as before.

I placed a layer of navy CS over the back (popped up with dimensionals) to cover everything up and make it nice and tidy.

Thanks so much for stopping by and have a great day!
Posted by Kim at 9:58 AM

You clever girl you! That is so darn cute!

WOW Kim this is so fantastic I love the creativity and Ian looks amazing as Anya ha ha ha, so clever thanks for sharing this, I love the movement, HuGs Kim :)

Hahaha!!! I had to laugh at your title. My mind completely to bodily functions falling from the sky. Fabulous tutorial by the way.

You are totally amazing! Thank you! :-)Traci

How awesome is this and how funny to realize Ian can be made to look girlie so easily! It's like my son looking so much like his older sister. Thanks for you extensive tutorial! Beth

You are soooo clever!! This is the cutest little para-tropper I ever saw!!