I have seen this type of scarf popping up on blogs and Pinterest. I thought they were so pretty and knew I could make a really special one using Spellbinders dies. 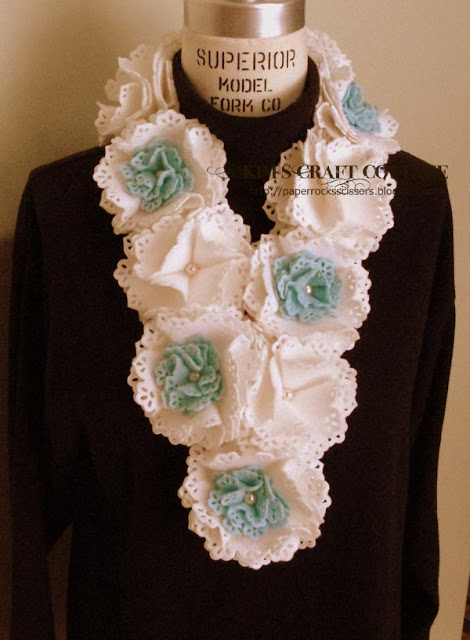 I used off white 35%/65% wool/rayon felt from Joann's. I died the wool myself using Rit Dye in Teal for the smaller flowers. I used the Spellbinders Floral Doily Motifs Die for all the flowers. 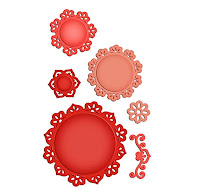 I My scarf was about 4o inches long which was 11 of the largest flower dies. Each large flower took 5 die cuts so I cut 55 flowers. Yes that is a lot but it was pretty easy with the die cut machine. I layed the flowers end on end and stitched the edges together. 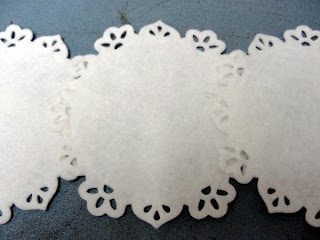 You don't have to be very neat on this step because it will be covered up. Sorry about the crappy pics but I had to get this done before my daughter's drum line performance and I just grabbed the camera and clicked on my horrible looking ironing board.

I stitched the flowers by hand but I am sure you could use a machine. I don't recommend gluing for this project as it would probably come out way too stiff to be comfortable when wearing. 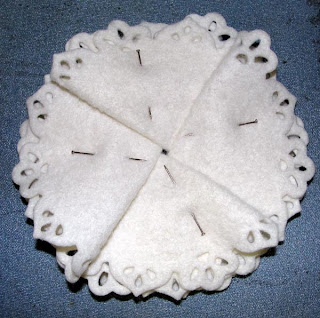 I have a step by step on how this flower is made HERE. Pin as shown with four flowers. Place one of the flowers on top of the first in line and stitch together in the center. Work your way down to the end. 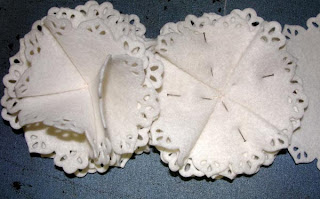 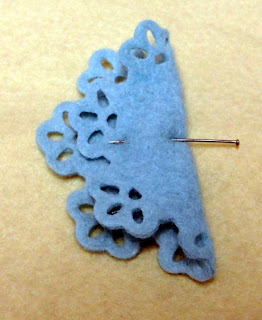 The teal flowers were stitched in the middle of every other cream flower on the scarf and a pearl button was added in the center of all flowers. 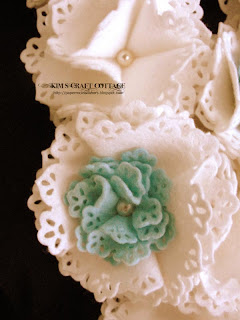 Cool huh? Thanks so much for stopping by and have a super week!

Kara @ Mine for the Making said...

This is so so so pretty! I love it! Come on over and linky up to my fashion party called DIY Diva Thurdsays fashion linky! We party every Th-M :)

Wow! How fabulous! I'm amazed at your creative and sewing talents!

Oh, wow! You should have an etsy shop for these! Gorgeous! I host a Monday link party called Make-It-Yourself Monday and would LOVE for you to come and link up with me. Each week, three submissions from the previous week are featured! Visit me at: http://anoriginalbelle.blogspot.com/2012/02/make-it-yourself-monday-15-link-up.html

Wow! That is so impressive!

Christina at I Gotta Create! said...

This is so pretty! Thanks for sharing!

Oh I love this! It would be great if you would share this with our readers for Fun Stuff Fridays. http://www.toysinthedryer.com/2012/02/fun-stuff-fridays-11.html

This scarft is just stunning! I shared it in my Saturday 7 Spotlight today. Thanks so much for linking up this week!

This is so pretty and feminine. Did you use the Spellbinders Wizard machine? I am new to the die cuts, and wondered if one of the cranberry colored ones is the way to go to cut fabric? Thanks for any tips you can share. It is a lovely project, and the flowers could be used for so many things!